Justine Legg ’20 had four things in mind when she made the decision to trek from San Antonio, Texas, to attend Syracuse University. She had been born in New York, and was determined to return to the northeast for college. She hoped to focus on the social sciences, and knew that Syracuse University’s top-ranked Maxwell School of Citizenship and Public Affairs had the reputation she was looking for. A school that offered a multitude of opportunities without being huge was also a prerequisite. And she wanted a strong study abroad program, because traveling had always been her dream. So she chose Syracuse—without even visiting. “Syracuse seemed to fit perfectly,” she says, “and it turned out to be even better than I expected.”

Legg is majoring in political science, policy studies, and citizenship and civic engagement. Taking on a triple major is a daunting commitment, but she welcomed the challenge. “I knew when I arrived on campus in Fall 2016 that I was only going to have four years here to learn and do as much as I can,” she explains. “Declaring three majors is my way of ensuring that I am “squeezing the orange” for all it’s worth. Each program provides me with the unique skills I’ll need as a future professional.”

Ironically, Legg spends as much time working and learning off campus as she does on campus. “When you are a student at Syracuse University, you are also a resident of Syracuse, New York,” she says. “This city has so much culture and diversity to offer beyond “The Hill.” When you return to campus, it feels like coming home, and that makes a difference when you are trying to adjust to a new sense of “home.”

When Learning is an Experience 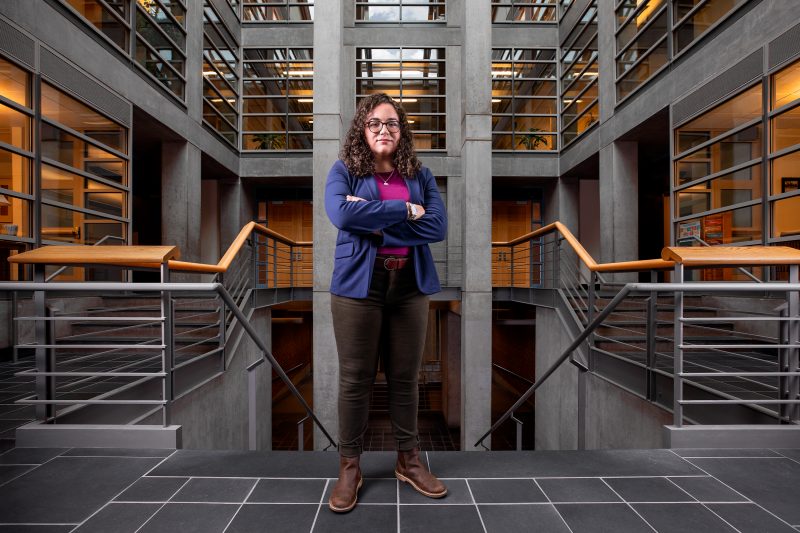 Syracuse University’s commitment to experiential learning has enabled Legg to forge significant professional relationships as an undergraduate. She works as a Leadership intern in Syracuse University’s Mary Ann Shaw Center for Public and Community Service, which enhances students’ experiences through community engagement. Through the Syracuse University Literacy Corps program, Legg works as a tutor and role model in a second grade classroom at Dr. King Elementary School in the Syracuse City School District. “The teacher and her students personify hard work, resilience and strength, and I am so grateful to be able to work with them.”

The major in citizenship and civic engagement requires students to have a community placement. Legg was so invested in her work at Dr. King that she wanted to use this as an opportunity to get more involved with the school. She became a member of the community engagement team at Dr. King, and decided to continue volunteering after her placement was finished. “The team at Dr. King has shown me what it’s like to think big and build something meaningful from the ground up,” Legg says.

Three years of exposure to an urban public school with a high concentration of at-risk children has brought her career aspirations into focus. “My ultimate goal is to work directly with students while making a positive impact on underfunded schools,” Legg explains. “I want to be in a position to help students who otherwise do not receive the same resources and support as their peers from other backgrounds. My dream job would be to work for the national or a state Department of Education and influence much-needed policy changes for public schools.”

Back on campus, Legg found another outlet for her leadership aspirations. She serves as a student event board member for Orange After Dark, an Office of Student Activities initiative that plans and executes late-night events on campus and in the community. “Each board member is responsible for leading two events per semester, which means managing event logistics as well as organization,” she explains. “This program and its leaders have pushed me and helped me grow as a student, professional and person.”

A four-month trip to France through Syracuse Abroad became a transformational part of Legg’s college journey. “It was my first time outside of the U.S. and I visited eight different countries, so everything was new and fascinating to me. It was one of the biggest highlights of my life,” she asserts. “I think college is a really important time for students to get out of their comfort zone as much as possible, and studying abroad is a perfect way to do that. It wasn’t always easy adjusting to a new way of life, but those challenges were where the most growth happened for me.”

It’s not just an exceptional study abroad program that sets Syracuse University apart from other schools. Legg believes size is important, and Syracuse is perfect for someone who wants to be more than a student ID number but doesn’t want to feel confined. “You never feel alone in a crowd here,” she says.

Legg believes that the variety of schools and colleges at Syracuse University also has great appeal for different populations of students. For those who are inclined toward community engagement and public service, the Maxwell School stands out. “Maxwell students are equipped with the tools and skills necessary for careers in politics or policy studies. The classes I have taken have been enriching, challenging and relevant to my academic and professional goals. But its uniqueness is in encouraging students to maintain a relationship with the community they work and study in.”

In that spirit, keeping her ties to Syracuse University after graduation next year is important to Legg, but she wants to go deeper. “I want to remain connected to Syracuse as a community,” she says. “When I look back, I won’t necessarily remember the notes I took, the PowerPoint slides I saw, or the papers I wrote. I’ll remember the people I met and the experiences we shared along the way. Those are the things that made my time here worthwhile.”

By Mary Beth Horsington. This story was first published on September 6, 2019 and last updated on April 14, 2020 here